Adventure Creator lets you make traditional 2D, 2.5D and 3D adventure games - those that emphasize storytelling, exploration and puzzles - such as Monkey Island, Grim Fandango, The Longest Journey, and Telltale's The Walking Dead. 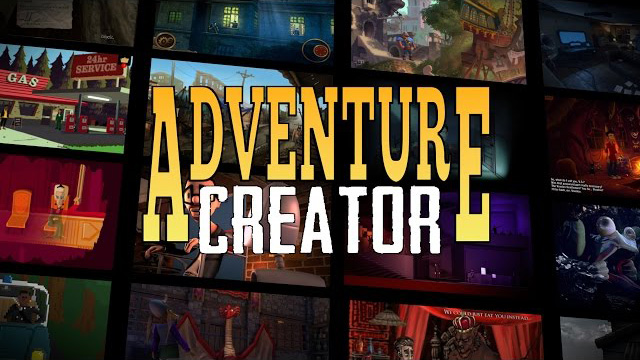 You can use Naninovel to handle dialogue scenes in AC or load AC from a Naninovel-based game for some custom gameplay.

Install both Adventure Creator and Naninovel (the order doesn't matter).

Set NaninovelAdventureCreator/Runtime/Actions as the source for custom actions in AC settings. Consult AC guide for more info on custom actions. 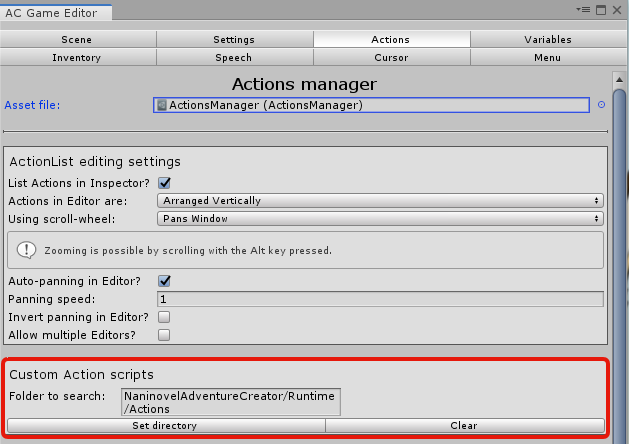 Depending on the setup, you may need to assign a special layer for Naninovel objects to prevent them from being rendered by AC cameras and vice-versa. This can be done via Naninovel's Engine configuration window. When using Naninovel as a drop-in system from AC-based game, you may also want to disable Initialize On Application Load and Show Title UI options in the Engine configuration.

Use Play Naninovel Script custom AC action to (optionally) turn-off AC, initialize Naninovel engine (when required) and load specified Naninovel script. By default, the AC and Naninovel cameras will also swap automatically, but you can prevent that by disabling Swap Cameras property.

Use @turnOnAC custom Naninovel command in a Naninovel script to enable AC, reset Naninovel engine state (optionally) and swap the cameras back (also optionally). State reset is controlled with reset and camera swap with swapCameras parameters.

It's also possible to play a specific AC's action list after turning on AC (exiting Naninovel mode) via @turnOnAC command with action parameter. Eg, given we have the following dialogue options (or any other type of action list) game objects on the scene: 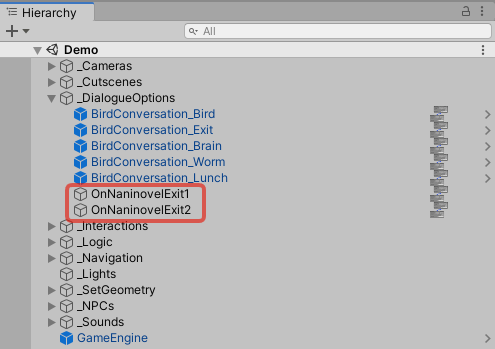 We can play them after exiting Naninovel mode like the following:

See the GitHub project for an integration example. When opening the project for the first time you'll get errors due to missing Adventure Creator and Naninovel packages. Just import them from Asset Store and the errors will go away.