At some point you may look for an option to compile all the project scenario script and managed text localizable data into a single or multiple spreadsheets. For example, you may want to share the text with a translation agency or editors for proofreading.

Spreadsheet extension allows to extract all the localizable data (text) from the project to .xlsx spreadsheets and then import it back. 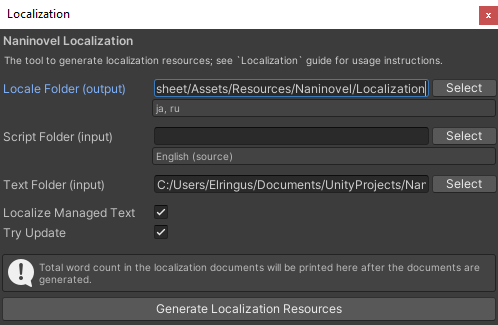 For more information on how to use the tool, see localization guide.

When the localization data is up to date, open spreadsheet tool with Naninovel -> Tools -> Spreadsheet editor menu.

Make sure all the source naninovel scripts are stored in a single directory; storing scripts in multiple directories and/or sub-directories is not supported by the extension. To organize script assets inside the directory, use labels and search filters.

Click "Export" button to export the project data to the selected destination.

When using single spreadsheet, each script and managed text document will be exported to an individual sheet inside the Excel file; otherwise, an Excel file per document will be created. Sheets will have at least two columns: "Template" and "Arguments". Template column contain all the source file (script or managed text) lines, with localizable parts (text) replaced with placeholders (eg, {0}, {1} and so on). Each consecutive non-localizable script line (eg, command lines that don't contain parameters that can be translated) will be appended to single template column cell, until a localizable line is discovered. Arguments column contain the text extracted from the associated localizable line.

When locales are defined in the project (via folder inside localization root), the associated columns will be added after the argument column. You're free to modify all the columns in the spreadsheet (including the template column), just make sure to preserve the argument to template relations.

After performing the required modifications, click "Import" button to import the data back to the project.

Project resources will be overwritten when importing from spreadsheet, so refrain from modifying the scenario scripts, managed text and associated localization documents, while the spreadsheet is being edited.

Find an example on how to setup and use the extension in the following project hosted on GitHub: github.com/Naninovel/Spreadsheet.

You can clone the project with a Git client or download it as a zip archive.

The project has a couple of test scripts stored in Assets/Scripts folder, managed text documents at Assets/Resources/Naninovel/Text and a Spreadsheet.xlsx at the root directory.