If you wish to modify an existing built-in UI prefab, you can find them at Naninovel/Resources/Naninovel/DefaultUI folder. While it's possible, please refrain from editing the built-in prefabs directly to prevent issues when updating the package. Rather duplicate the prefab you want to modify (Ctrl/Cmd+D), move it out of the package folder and modify the duplicate instead.

When creating a new prefab from scratch, don't forget to attach a component that implements interface of the UI you're going to override. This component should be attached to the root object of the prefab.

To add a new custom UI (without overriding any of the built-in UIs), attach a CustomUI component to the root object of your custom UI prefab.

If you're OK with C# scripting and want to override default logic of the UI, create a new component, implement IManagedUI interface (feel free to inherit the component from ScriptableUIBehaviour to fulfill all the interface requirements) and attach the created custom component instead. Check Naninovel/Runtime/UI folder for reference implementations of the built-in UIs. Here is an example of minimal implementation of a custom UI component:

When the prefab is ready, add it to Custom UI list in the UI configuration accessible with Naninovel -> Configuration -> UI context menu. 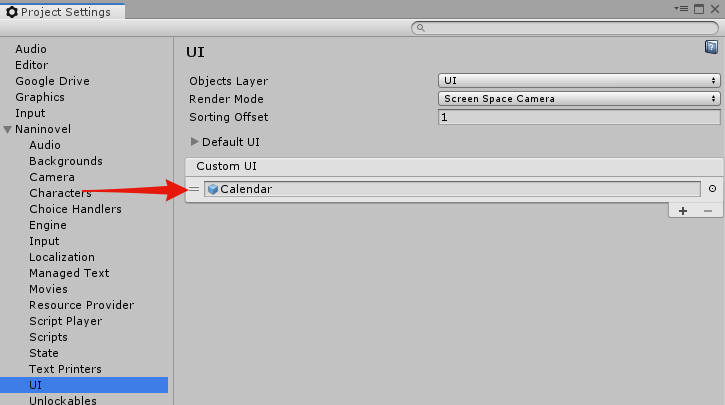 When the engine is initializing it'll spawn all the prefabs added to the Custom UI list.

To disable or override the default (built-in) UIs, use the Default UI area. 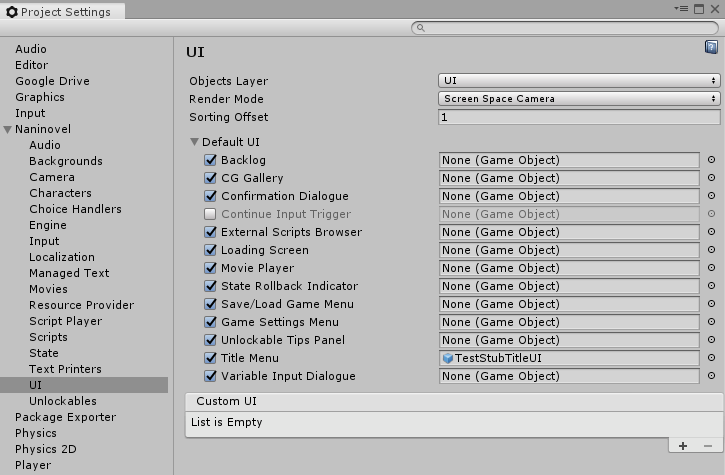 To disable a default UI, uncheck the toggle behind the corresponding UI record and to override the UI, assign a custom prefab to the "Game Object" field of the record.

When creating custom buttons, you may prefer to use naninovel scripts to handle the onClick events instead of C#. Add Play Script On Button Click component to the button gameobject and either select an existing naninovel script or write the naninovel script right inside the text area field. 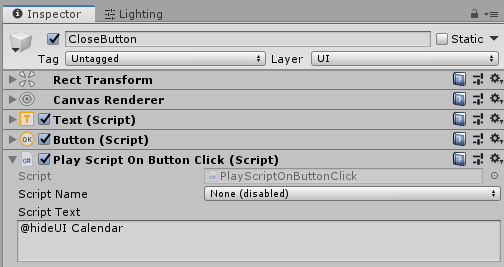 The script will be executed when user clicks the button in play mode. Notice, that when an existing naninovel script is selected via dropdown list, the script text area will be ignored and selected naninovel script will be played instead of the currently played one; in case you wish to additively execute some script logic without interrupting the currently played script, use the script text area.

Check out the following video tutorial, where we create a custom calendar UI and bind it to the date and month custom state variables.

Be aware, that the video was created with a previous version of the engine and some of the steps may not reflect how things currently work. We'll update the video after the stable release, but you can still use the current one to get a grasp on how to use the feature on a conceptual level.

Within the following GitHub repository you can find the project showed in the above video tutorial.