The engine is designed with the following principles in mind: scene independence and service-orientation.

All the Naninovel systems either not directly bound to a MonoBehaviour or attached to a persistent root GameObject. 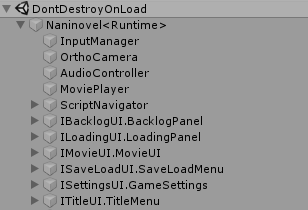 The following root objects are used, depending on the environment:

All the required gameobjects are created on engine initialization, which is executed automatically and asynchronously when the application starts (right after entering play mode or running a build) via a RuntimeInitializeOnLoadMethod method. You can change this behavior by disabling Initialize On Application Load property in the engine configuration and manually invoking the initialization using RuntimeInitializer (for runtime) or EditorInitializer (for editor) classes.

As the initialization process is asynchronous, either use async-await approach when invoking the InitializeAsync() method or subscribe to the static Engine.OnInitialized event.

To completely disable and remove from memory all the engine systems, use Engine.Destroy() static method.

Most of the engine features are implemented via engine services. Engine service is an implementation of an IEngineService interface, which handles a specific job, like executing naninovel scripts, managing actors or saving-loading the game state.

The following UML diagram illustrates a high-level concept of the engine architecture. Note that all the class and interface names in the diagram are organized under Naninovel namespace. Eg, to reference Engine class, use Naninovel.Engine or include the namespace.