Each of the built-in UIs can be disabled or customized; see UI customization guide for more information.

All the built-in UIs are implemented with adaptive layout. This allows the UI to remain usable on all the platforms, no matter the screen resolution.

UI toggling feature allows user to hide/show the in-game UI as a whole.

Activate ToggleUI input (Space key by default for standalone input module) or use HIDE button on the control panel to hide/show the UI.

When UI is hidden, Continue input or clicking (touching) the screen will also un-hide the UI.

Before attempting to create custom UIs or modify existing ones first make sure you're familiar with Unity's UI system (uGUI). While there are video tutorials and example projects for UI customization available below, please be aware that we won't be able to provide any additional guidance or support for Unity's built-in tools; consult the support page for more information.

To add a custom UI or modify (disable) a built-in one, use UI resources manager accessible via Naninovel -> Resources -> UI editor menu. 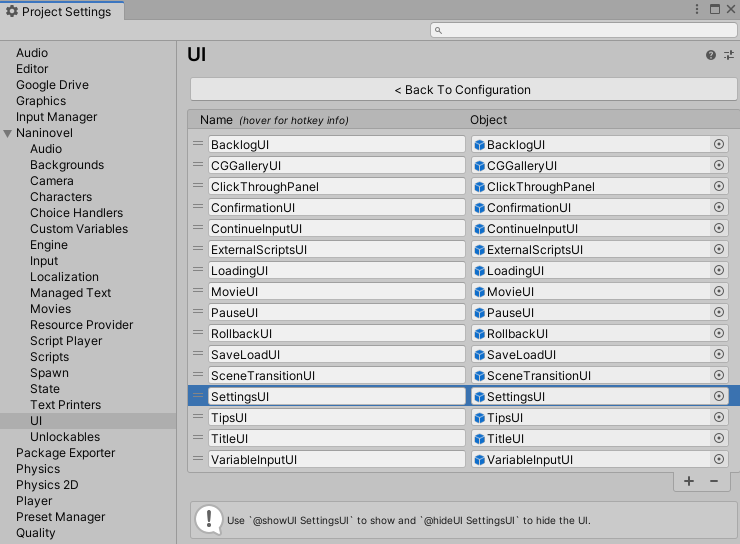 When the engine is initializing it'll instantiate all the UI prefabs assigned in the resources manager.

To show or hide any of the UIs listed in the resources manager use @showUI and @hideUI commands respectively.

To add a new custom UI, create a prefab via Create -> Naninovel -> Custom UI asset context menu and add it to the UI resources list. It'll then be instantiated along with the other UI prefabs on the engine initialization.

Following video tutorial shows how to add a custom calendar UI with special reveal and hide animations. The calendar will display a date based on a custom variable, which can be changed via naninovel scripts and is saved with the game. The calendar will automatically update when the variable is changed. All this is achieved without any C# scripting.

Unity project showed in the above video tutorial is available on GitHub. You can clone the repository with a Git client or download it as a zip archive. Be aware, that Naninovel package is not distributed with the project, hence compilation errors will be produced after opening it for the first time; import Naninovel from the Asset Store to resolve the issues.

Another, more advanced example of adding a custom inventory UI with a grid layout, pagination and drag-drop window can be found in the inventory example project on GitHub.

Specifically, the UI-related scripts are stored at Runtime/UI and prefabs at Prefabs directories.

When you create a new custom UI prefab via the context menu, the prefab will have a Custom UI component attached to the root object. This component (or rather the fact that the component is implementing IManagedUI interface) is essential to make the prefab accepted as a UI by the engine. 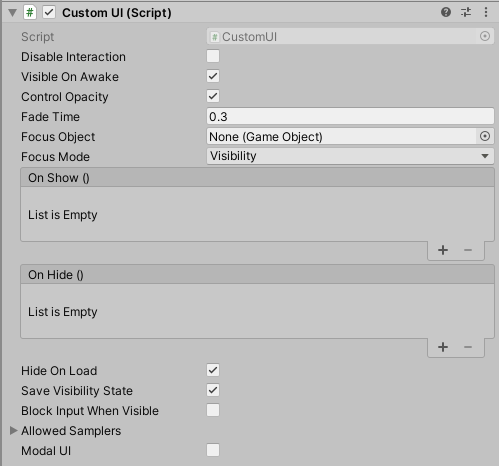 When Visible On Awake is enabled, the UI will be visible when the UI is instantiated (right after the engine is initialized) and vice-versa.

When Control Opacity is enabled and Canvas Group component is attached to the same game object, Alpha property of the Canvas Group component will be changed in sync with the current visibility state of the UI element. Fade Duration will then control time (duration in seconds) of the opacity fade animation. In case you wish to implement your own effect to accommodate the visibility status of the UI element (eg, slide animation instead of fading the opacity), disable Control Opacity property and use On Show and On Hide Unity events to react on visibility changes.

In case you wish to support gamepad or keyboard navigation over the UI, assign a game object with an interactable component (eg, a Button) to Focus Object property. This object will then be automatically focused when the UI becomes visible allowing to navigate over other interactable objects with a gamepad and/or keyboard. See Unity's guide on UI navigation for more info on how to setup the navigation behavior.

When Focus Object is assigned, Focus Mode property allows to choose when to focus the object: Visibility mode will focus it right after the UI becomes visible and Navigation will postpone the focus until player activates a navigation key on gamepad (left stick or D-pad) or keyboard (arrow keys).

On Show and On Hide Unity events allow to hook custom handlers to react to the UI visibility changes. For example, you can hook an Animator triggers to fire some custom animations when the UI becomes visible and vice-versa.

When Hide On Load is enabled, the UI will automatically be hidden when the engine is starting a load operation. This usually happens when loading another naninovel script or exiting to title menu.

Enabling Save Visibility State will make the visibility state of the UI persistent, so that when player loads a saved game, the UI will be in the same state (visible or hidden) as it was when the game was saved.

Block Input When Visible allows to disable input processing when the UI is visible. This is useful to prevent the player from using various hotkeys (hiding the UI, continue reading, etc) while he's interacting with the UI. Allowed Samplers allows to add exceptions to the blocked inputs; eg, you can add ToggleUI input name to the list, allowing player to toggle the UI while still preventing activation of any other inputs.

Enabling Modal UI makes all other UIs ignore interaction while the UI is visible. This is similar to Block Input When Visible, but affects event-based interaction (mouse clicks, touches, UI navigation) instead of direct input processing.

Several other components will also be added by default when creating a custom UI:

You are free to modify or remove any of the above components as you see fit.

To disable a built-in UI remove corresponding record from the UI resources list and the prefab won't be instantiated on engine initialization.

If you wish to modify an existing built-in (default) UI prefab, you can find them at Naninovel/Prefabs/DefaultUI package folder.

While it's possible, please refrain from editing the built-in prefabs directly to prevent issues when updating the package. Rather, create a new prefab from template via Create -> Naninovel -> Default UI -> ... asset context menu or manually duplicate the prefab you want to modify (Ctrl/Cmd+D) and move it out of the package folder. Then assign the created/modified prefab to an existing record (Object field) in the UI resources manager.

In the following video tutorial you can learn how to override built-in title (main) menu. It'll also show how to use title script to add a background and special effect when entering the title menu; no C# scripting is used to achieve that.

Unity project showed in the above video tutorial is available on GitHub. You can clone the repository with a Git client or download it as a zip archive. Be aware, that Naninovel package is not distributed with the project, hence compilation errors will be produced after opening it for the first time; import Naninovel from the Asset Store to resolve the issues.

When creating a new prefab from scratch, make sure to attach a component that implements interface of the UI you're going to override. This component should be attached to the root object of the prefab.

If you're OK with C# scripting and want to override default logic of the UI, create a new component, implement IManagedUI interface (feel free to inherit the component from CustomUI or ScriptableUIBehaviour to fulfill all the interface requirements) and attach the created custom component instead. Check Naninovel/Runtime/UI folder for reference implementations of the built-in UIs. Here is an example of minimal implementation of a custom UI component:

When creating custom UIs, you may want to execute some commands or start playing a specific naninovel script in reaction to some events (eg, a button click).

Add Play Script component to a game object and either select an existing naninovel script or write the commands right inside the text area field; then route Unity event of some other component to invoke Play() method on the Play Script component. The script will be executed when the event is triggered at play mode. The example below hides a custom UI when the button is clicked. 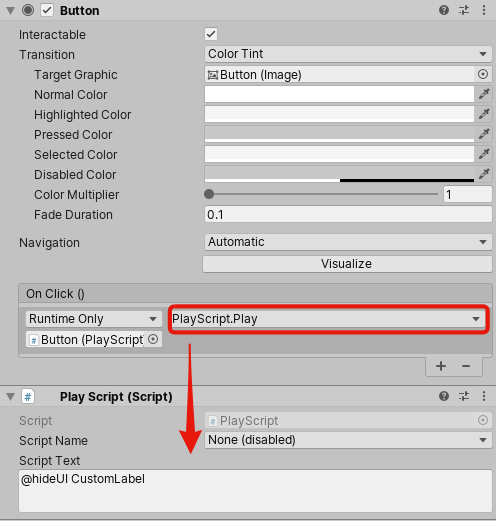 It's also possible to reference Unity event arguments in the script text with {arg} expression; supported arguments types are: string, integer, float and boolean. Below example demonstrates executing camera shake and playing a sound effect when a boolean Unity event is positive and playing a background musing when it's negative. 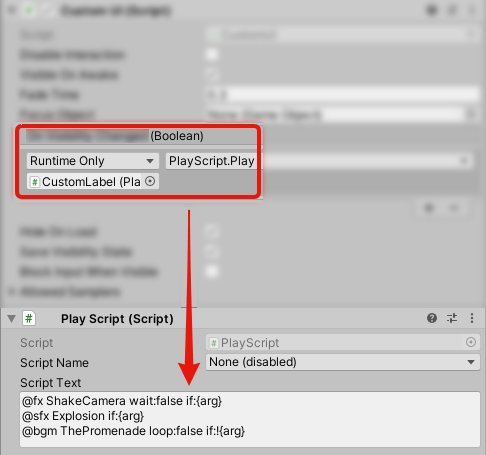 Conditional block commands (if, else, elseif, endif) are not supported in the script text.