The engine is designed with the following principles in mind: scene independence and service-orientation.

While Unity design promotes using scenes and prefabs composition, it's not very practical when developing visual novels. Naninovel systems either not directly bound to a MonoBehaviour or attached to a persistent root GameObject. 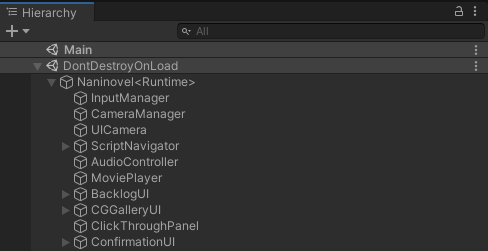 The following root objects are used, depending on the environment:

All the required game objects are created on engine initialization, which is executed automatically and asynchronously when the application starts (right after entering play mode or running a build) via a RuntimeInitializeOnLoadMethod method. To customize the initialization scenario, see manual initialization guide.

In case the scene independent design is not working for you, just disable Scene Independent option in the engine configuration menu and all the Naninovel-related objects will become part of the Unity scene where the engine was initialized and will be destroyed when the scene is unloaded.

Most of the engine features are implemented via engine services. Engine service is an implementation of an IEngineService interface, which handles a specific job, like executing naninovel scripts, managing actors or saving-loading the game state.

The following UML diagram illustrates a high-level concept of the engine architecture. Note that all the class and interface names in the diagram are organized under Naninovel namespace. Eg, to reference Engine class, use Naninovel.Engine or include the namespace.