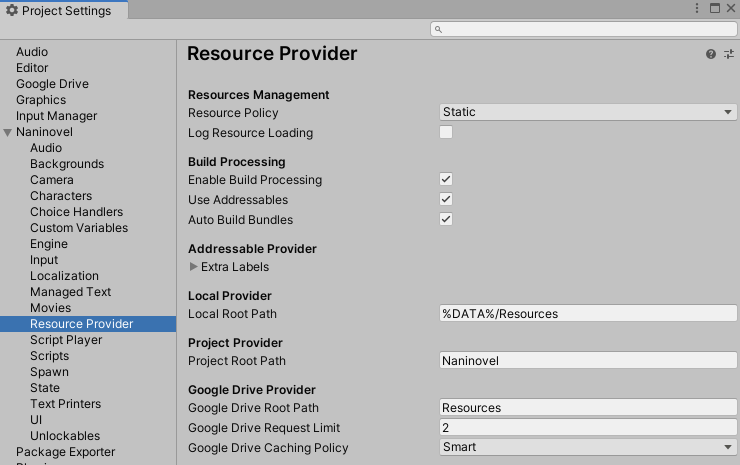 Resource Policy property dictates when the resources are loaded and unloaded during script execution:

Find more about how Naninovel loads and loads the resources in the memory management guide.

Enable Build Processing enables a build pre-processing procedure required to ensure assets assigned via editor menus are available in the builds. Disabling the processing may be required if you're using a custom build environment or attaching your own build hooks. When enabling or disabling the property, restart Unity editor in order for the change to take effect.

When addressable system is installed, enabling Use Addressables will optimize asset processing step improving the build time; enabling Auto Build Bundles at the same time will cause asset bundles to automatically compile when building the player.

Other properties in the configuration menu are provider-specific and described below.

Resource-specific providers behavior is configured via Loader properties, available in the corresponding configuration menus. For example, here is the default loader configuration used to retrieve audio resources (BGM and SFX):

Path Prefix property allows specifying an additional path over provider's root path for the specific type of resources. Eg, given we're going to retrieve an "Explosion" audio file from a project's "Resources" folder, setting path prefix to "Audio" will result in the following resource request: Resources.Load("Audio/Explosion").

Be aware, that while in editor a special "Editor" resource provider is always used first (no matter the loaders configuration). The provider has access to all the resources assigned via Naninovel's configuration and resource manager menus (Naninovel -> Resources -> ...). When the game is built, all such resources are automatically copied to a temporary "Resources" folder or (when addressable system is installed and enabled) registered in the addressables configuration and compiled to asset bundles. Remember to always perform any provider-related tests in builds, not in the Unity editor.

The Addressable Asset system is a Unity package allowing to load assets by "address". It uses asynchronous loading to support loading from any location (local storage, remote web hosting, etc) with any collection of dependencies. Consult Unity's documentation on how to set up, configure and use the system.

Naninovel will automatically use addressables when the package is installed in the project and Use Addressables property is enabled in resource provider configuration. No additional setup is required. All the assets assigned in the Naninovel's configuration menus (eg, scenario scripts, character sprites, audio clips, etc) will be registered with the system (assigned an address) when building the player.

Make sure Bundle Mode in "Naninovel" addressable group settings is set to Pack Separately. Otherwise, the resources won't unload on release, as they all will be packed to a single bundle, while Addressable System can't unload single resources from a bundle.

In case you wish to configure how the Naninovel addressable assets are served (eg, specify a remote web host), edit Naninovel groups via Window -> Asset Management -> Addressables -> Groups menu. The groups are automatically created when first building the game; in case they're missing, you can create them manually.

Asset records under Naninovel addressable groups are automatically generated on each build. Don't edit the records manually, as any changes will be lost on build.

By default, Group By Category option in resource provider configuration is disabled, making all the Naninovel resources be added under a single "Naninovel" addressable group. In case you wish to group the resources by category (eg, to specify individual packing or serving options), enable the property and re-build. When enabled, each resource category (eg, scripts, audio, characters, etc) will be added under their own addressable group named "Naninovel-Category", where Category is the category of the resource. 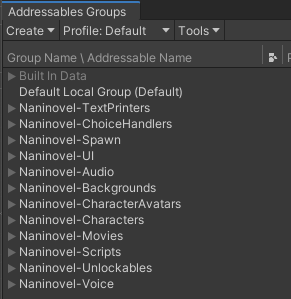 To expose an addressable asset to Naninovel without using editor menus, use a custom addressable group; group can have any name, except it can't start with the reserved "Naninovel" (otherwise, it'll be recognized as an auto-generated and will be cleared on build). Address of the exposed assets should start with "Naninovel/" and they should have a "Naninovel" label assigned. You can specify additional labels to filter the assets used by Naninovel via Extra Labels property in resource provider configuration menu.

Addressable provider is only used in runtime builds and is disabled in editor by default. In case you're manually exposing resources via addressable address instead of assigning them with Naninovel's resource managers, you can enable it with Allow Addressable In Editor property in resource provider configuration menu.

Check the example project on how to manually expose Naninovel resources to addressable provider (without using resource editor menus) and serve specific assets from a remote host.

We're not providing any tutorials or support for Unity's addressable asset system itself, like setting up a remote web hosting for you assets or other deploy/serving scenarios; consult the support page for more information.

Be aware, that in most cases using "Resources" folders is discouraged. Consider assigning the resource via a Naninovel resource manager menu when possible or use an addressable system instead; don't forget to move the asset out of a "Resources" folder after that.

Local provider loads raw files from the file system and converts them at runtime, which is slow and limits the supported file types compared to other providers. Only use it in development or for specific features (eg, community modding).

Local Path Root property in the resource provider configuration should point to a folder, where the local resources are stored. You can either use an absolute (eg, C:\Resources) or a relative path, starting with one of the following origins:

Default %DATA%/Resources value points to a "Resources" folder inside game's data directory (which is different depending on the target platform).

As one of the usage examples, let's say you want to load naninovel scripts from a C:/Users/Admin/Dropbox/MyGame/Scripts folder, which you share with collaborators to author the scenario. While it's possible to just specify an absolute path to the root folder (C:/Users/Admin/Dropbox/MyGame), that will require all your collaborators to also store the folder by the exact same path (under the same drive label and user name). Instead, use the following relative path over a "UserProfile" special folder origin: %SPECIAL{UserProfile}%/Dropbox/MyGame.

Given path prefix under the scripts configuration is set to Scripts and local provider is added to the list, script navigator (accessible with nav console command) should now pick up any ".nani" text files stored under the folder.

You can share your Google Drive resources folder with other users to work in collaboration without the need to use version control systems or other complicated tools.

In order to be able to choose Google Drive as the resource provider you have to first install UnityGoogleDrive. Consult the GitHub project readme for installation and setup instructions.

Before installing a package from a Git repository, make sure a Git client is installed on your machine and Git executable path is set to the PATH system environment variable (usually performed automatically during the installation).

When UnityGoogleDrive package is installed and configured, related properties will appear in the resource provider configuration menu. 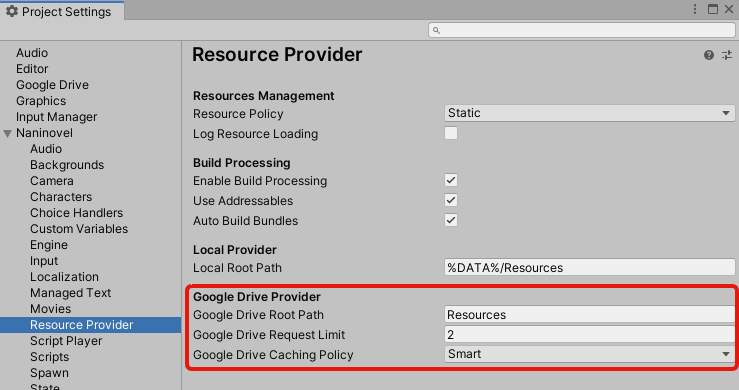 Google Drive Root Path is a relative path inside your Google Drive's folder to a directory, which should be considered the resources root. Eg, if you want to store the scenario scripts under MyGame/Scripts, specify the root as MyGame.

Google Drive Cache Policy dictates caching behavior of the downloaded resources. Smart will attempt to use Changes API to check whether the requested (cached) resource has changed on the remote folder before downloading it. Purge All On Init will purge the cache on engine initialization and always use cached versions after the first download. The cache can also be manually purged at any time with purge console command.

Don't forget to add Google Drive to the list of providers for the resources you wish to retrieve with it. Eg, following will make the script manager to look for scripts in the Google Drive in addition to addressable and project sources:

Check NaninovelSandbox project for an example on how to set up and use Google Drive provider. In the project, scripts, characters, backgrounds and audio resources are served from corresponding files stored on authorized user drive.

It's possible to add a custom implementation of a resource provider and make Naninovel use it with (or instead of) built-in providers.

To add a custom provider, create a C# class with a parameterless constructor and implement IResourceProvider interface. Once created, custom provider type will appear in all the loader configuration menus along with the built-in types.

You can find built-in resource provider implementations at Naninovel/Runtime/Common/ResourceProvider package directory; feel free to use them as a reference when implementing your own versions.

Below is an example of a custom provider, that does nothing, but logs messages when used.

Naninovel is independent of Unity scenes, hence the assets (textures, audio, prefabs, etc) are loaded when they're required by the played script and unloaded automatically; specific policy can be selected via Resource Policy property in resource provider configuration menu.

Resource provider manager keep track of the references to the loaded resources and dispose (unload) the resources when they're not used ("held") by any users ("holders").

The mechanism is most prominent in script commands. For example, let's assume you want to play a background music with a custom command. The audio player will require an audio clip asset (resource) to play, so we need to preload and "hold" the asset before the command is executed and release it after:

Notice the command implements Command.IPreloadable interface. Script player will detect such commands and invoke the preload and unload methods to ensure the assets are ready before the command is executed and released after.

To notify Naninovel, that you're using an asset, use Hold method of resource provider service:

Be aware, that while you're holding an asset, it won't be unloaded by Naninovel, so it's up to you to dispose it to prevent memory leaks:

"Holder" can be a reference to any object; usually it's the same class that is using the asset. It's used to distinguish the holders and prevent same holder from accidentally holding a resource multiple times.

Below is an example of Unity component, which will prevent Naninovel from ever unloading an asset: