To expose voice clips to the engine, store them under Resources/Naninovel/Voice folder (can be changed in audio configuration under Loader foldout). You can additionally organize them with sub-folders, if you wish; in this case use forward slashes (/) when referencing them in naninovel scripts. Eg, voice audio clip stored as Resources/Naninovel/Voice/Intro/Day/25.wav can be referenced in scripts as Intro/Day/25.

It's also possible to use addressable asset system to manually expose the resources. To expose an asset, assign address equal to the path you'd use to expose it via the method described above, except omit the "Resources/" part. Eg, to expose a "Hello.wav" voice clip, assign the clip asset following address: Naninovel/Voice/Hello. Be aware, that addressable provider is not used in editor by default; you can allow it by enabling Enable Addressable In Editor property in resource provider configuration menu.

You can use any audio formats supported by Unity for your voice clips.

Use @voice command followed by the clip name (path) to play the voice in naninovel scripts, eg:

— will play a voice clip asset stored at Resources/Naninovel/Voice/Hello.wav.

The @voice commands are intended to occasionally play voice clips at specific moments and are not suited for implementing a complete voiceover; see the "Auto Voicing" section below for more information on how to handle voicing in projects, where most of the text lines have an associated voice clip. Some built-in features (eg, replay voice in backlog, voiceover documents, etc) works only with the auto voice workflow.

In fully-voiced games, it could become tedious to specify a @voice command for each voiced line. Auto voicing feature allows to automatically play a voice clip that has a name equal to the line number of the currently played @print command; this way, you won't have to use @voice commands in naninovel scripts at all — voices will be automatically played when the corresponding text lines are printed in the game.

Audio clips used for the auto voicing feature should be grouped under a folder with name equal to the script name, and has the following name: LineNumber.CommandIndex, where LineNumber is the line number of the corresponding print command and CommandIndex is the inline or command index of the print command in cases when dealing with generic text lines.

For example, consider the following naninovel script with name "Script001":

In order for the auto voicing system to play corresponding audio clips when printing those lines, the clips should be placed under Resources/Naninovel/Voice/Script001 folder (or registered with addressable system) and have the following names:

To simplify the process, when auto voicing feature is enabled, name of voice clip for the currently printed text is displayed in the debug window: 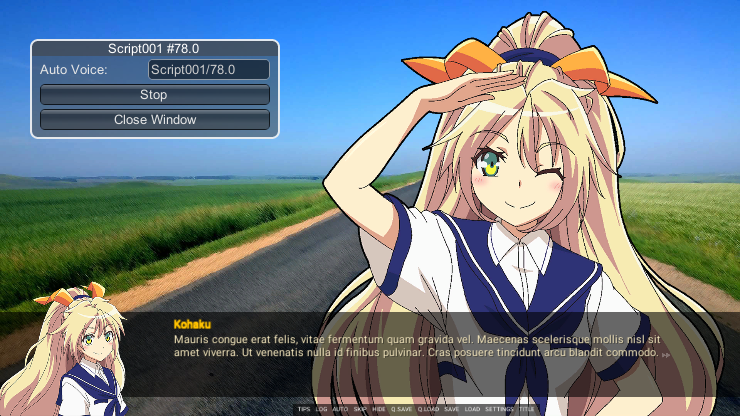 To open the debug window, make sure Enable Development Console is turned on in the engine configuration, then press ~ key while in play mode, type debug and press Enter.

The auto voicing workflow described above works best, when the voiceover is added after scenario scripts are finished. In case you wish to add voicing and modify scripts at the same time, you may find yourself constantly changing voice clip names to accommodate edits in the associated scripts.

You may also wish to name and organize the voice clips in a custom manner, or refrain from using the "Resources" folders.

Content Hash auto voice mode was added to address the above cases. You can set voice mode in the audio configuration menu via Auto Voice Mode dropdown; make sure Enable Auto Voicing property is enabled, otherwise the dropdown won't show.

In contrast to the default, content hash mode associates voice clips with the printed text and author ID, instead of script names, line and inline indexes (aka playback spots). The association can be performed either via voice map utility or by assigning addresses to audio clip assets with Unity's addressable asset system (or otherwise exposing the assets to another resource provider).

When the content hash mode is selected, an "Open Voice Map Utility" button will appear in the audio configuration menu; you can also access the utility via Naninovel -> Tools -> Voice Map editor menu.

First, select script file for which to map the voice clips. If the selected script contains any print commands (or generic text lines), they will be listed in pairs with audio clip fields. Drop (or select) a voice clip via the field to associate voice with the text. It's also possible to auto-map the clips; for this name the clip assets equal to the start of the voiced line text and drag the clips (or folder with the clips) to the voice map utility.

When assigning the clips via voice map window, make sure to store the voice clips outside any "Resources" folders to prevent conflicts.

If you then add, delete or reorder lines in the scripts, associations won't break. However, be aware, that changing printed text content will break association with the modified line.

In cases same author have equal text messages (in the same or a different script), both messages will be associated with the same voice clip. If that is not desired, change one of the messages to be printed via @print command with an arbitrary voiceId parameter to differentiate the messages.

To associate the clips without using voice map utility, expose the assets to a resource provider using voice hash as the resource name prefixed by the voice loader prefix (Voice by default). To find voice hash of a particular voiced line, use voiceover documents; the hash is displayed after voice's playback spot prefixed by #. For example, to associate a line with #2670eb4 hash with addressable resource provider, use the following address Naninovel/Voice/2670eb4.

When using auto voicing, you may want to let players control voice volume for specific characters or, more correctly, authors of the printed text messages. For example, a player may decide to mute voice of the main protagonist or make a specific character voice lower.

To set up per-author voice control, create a custom settings UI, add a new slider (you can duplicate "VoiceVolumeSlider" already present in the prefab) and specify author (character) ID in the Author ID field. 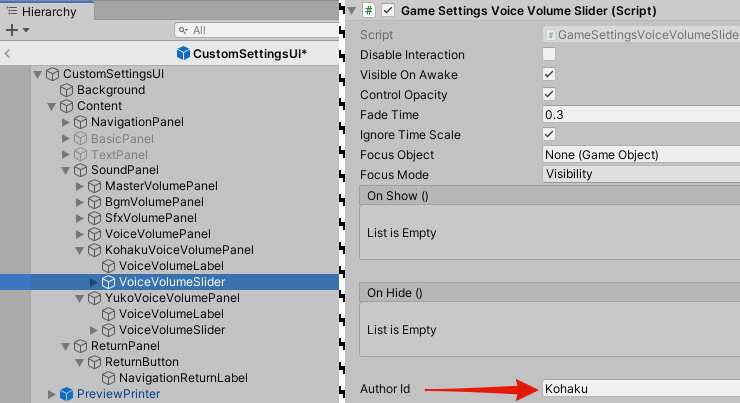 When adding voice over for different localizations, it's possible to allow player to select the voice language independently of the main localization (eg, play the game with English text and UI, but with Japanese voice over).

To add voice language dropdown to the game settings, assign Voice Locales property in the audio configuration menu. Add the language tags of the locales for which you have the corresponding voice resources. Eg, the example below will allow the player to choose from English and Japanese voices:

When the property is assigned, "Voice language" dropdown will appear in the game settings menu: 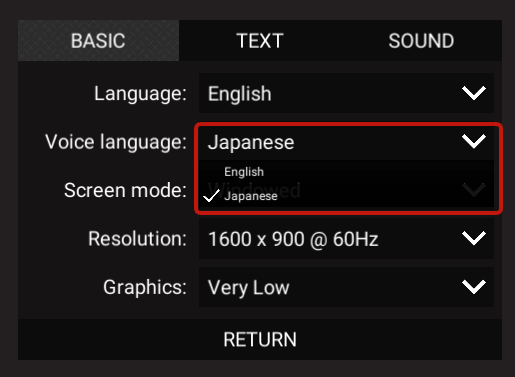 The voice language feature won't work with Content Hash auto voicing mode, as this mode binds voice resources directly to the script content, which is different for each localization. Use either Playback Spot auto voicing mode or manually play the voice clips with @voice command.

For more information on how to localize game resources, see the localization guide.

The voiceover documents are intended to be used by the voice recording engineers and actors when producing the voiceover audio.

Locale property allows to select a specific locale for which to generate the documents (the localized naninovel scripts for the selected locale should exist in your project).

Format property controls type of file and formatting of the voiceover documents to produce:

Below is an example of a voiceover document generated with Markdown format.

It's possible to inject custom voiceover document generator in case you wish to format and/or serialize the documents in a special way.

To add custom generator, create a new C# class with a parameterless constructor and implement IVoiceoverDocumentGenerator interface. The utility will automatically pick such class and use it instead of the built-in generators.

Below is an example of a custom voiceover generator, which appends a header with script name and locale followed by voice path and hash > author > text line for each print text command found in the script.