Opposed to characters, backgrounds are actors used to represent a back layer of the scene: locations, sceneries, landscapes or anything that should always appear behind the characters.

In case you have a lot of backgrounds and/or appearances per background and it's inconvenient to assign them all via editor menu, use actor record assets (Crate -> Naninovel -> Actor Record -> Background) which support multi-editing and organizing the records with folders; check the video below for an example.

It's possible to use addressable asset system to associate resources with actor records without using editor menus. Eg, to associate a "Beach" appearance with "MainBackground" background, assign the texture asset following address: Naninovel/Backgrounds/MainBackground/Beach and assign Naninovel label to the asset in addressable group configuration. Be aware, that addressable provider is not used in editor by default; you can allow it by enabling Allow Addressable In Editor property in resource provider configuration menu. Find more info on using addressable provider in the resource providers documentation.

In naninovel scripts, backgrounds are mostly controlled with @back command:

Main background actor record is created by default in the background resources manager and can't be renamed or deleted; however, parameters of the main background (implementation, pivot, PPU, etc) can be freely changed.

When camera is rendering in orthographic mode and Match Mode in background actor configuration is not disabled, the actor will attempt to match its size against current screen size. This is performed to handle the cases when display aspect ratio is different from the background's. When the matching is disabled and the aspect ratios are different, "black bars" will appear. 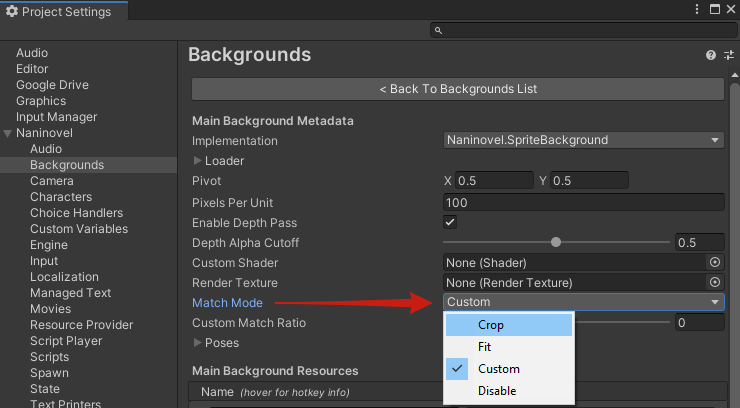 While for standalone (PC, Mac, Linux) builds you can limit the available aspect ratios in the player settings, on web, consoles and mobiles it's not possible and the applications have to adapt for the target devices instead.

Following match modes can be set for each background actor (except of generic implementation):

In case you wish to implement a similar matching feature for a generic or custom background see the scale to screen example on the forum.

Pose name can be used as appearance in @back command to apply all the selected parameters specified in the pose at once, instead of specifying them individually via the command parameters.

Notice, that when a pose is used as appearance, you can still override individual parameters, eg:

Sprite implementation of the background actors is the most common and simple one; it uses a set of texture assets wrapped over a quad mesh (sprite) to represent appearances of the background. The textures can be based on .jpg, .png, .tiff, .psd or any other image file format supported by Unity.

Choose file formats that are most comfortable for your development workflow. When building the project, Unity will automatically convert all the source resources (textures, audio, video, etc) to the formats most suitable for the target platform, so it won't make difference in which format you originally store the resources in the project. Find more information on how Unity manage project assets in the official documentation.

Naninovel will attempt to make the backgrounds cover the whole camera frustum by default, so make sure to size the source textures so that the aspect ratio is equal to the reference resolution; see match mode guide for more information on how to change or disable this behaviour.

Define reference resolution with your team before starting the work on the art assets (both characters and backgrounds). This way the artists will be able to author the assets with the correct dimensions and you won't have to edit them later.

For the supported video formats for each platform see Unity docs for video sources. When using video with an alpha channel (transparency), see the guide on the supported formats.

When Transcode is disabled in the video asset import settings, the clip may not be playable on some platforms. When a video is not playing in the build, try enabling the transcode option and rebuild the player. 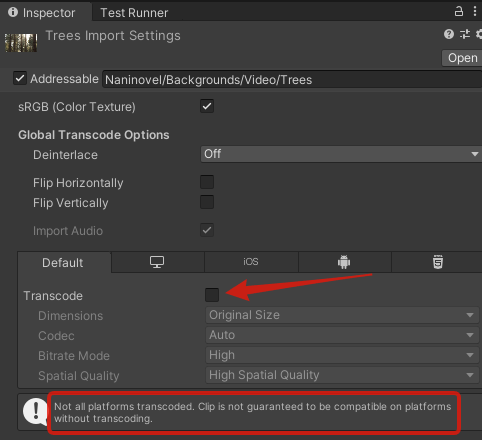 In case having issues with achieving a seamless loop, make sure the video has exactly same starting and finishing frames and a compatible encoding setup; check our video loop example project for the reference.

To prevent specific appearance from looping, append NoLoop (case-insensitive) to the appearance name.

On WebGL Unity's video player can only work in streaming mode, so all the video resources will be copied to Assets/StreamingAssets/Backgrounds folder upon building the WebGL player. StreamingAssets folder will also appear in the build output directory; make sure to preserve it when publishing the build and check that your web server allows reading the data from this folder.

The copied video files won't be transcoded by Unity (even if the option is enabled), so the source files should initially be in a format supported by the web browsers; alternatively, you can replace the clip files in the game directory after the build. Below is the detailed metadata of a background video clip that is used in our WebGL demo:

If you're using a video format other than mp4 (eg, webm), set the extension of the hosted files via Video Stream Extension property in the resource provider configuration. 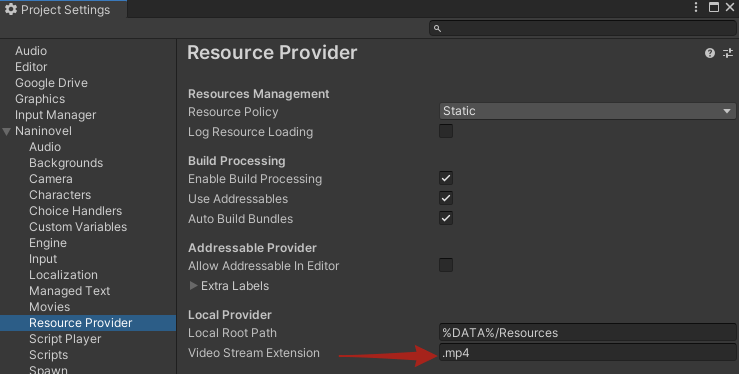 The layered implementation allows composing backgrounds from multiple sprites (layers) and then toggle them individually via naninovel scripts at runtime.

To create a layered background prefab, use Create -> Naninovel -> Background -> Layered asset context menu. Enter prefab editing mode to compose the layers. Several layers and groups will be created by default. You can use them or delete and add your own.

The layered backgrounds are very similar to layered characters; consult the documentation for more info on how to set up and control them via naninovel scripts.

Don't forget that nameless parameter in @back command is expecting appearance and transition type (not ID and appearance as with @char command), so specify layer composition expressions in the following way:

Generic background is the most flexible background actor implementation. It's based on a prefab with a Generic Background Behaviour component attached to the root object. Appearance changes and all the other background parameters are routed as Unity events allowing to implement the behavior of the underlying object in any way you wish. 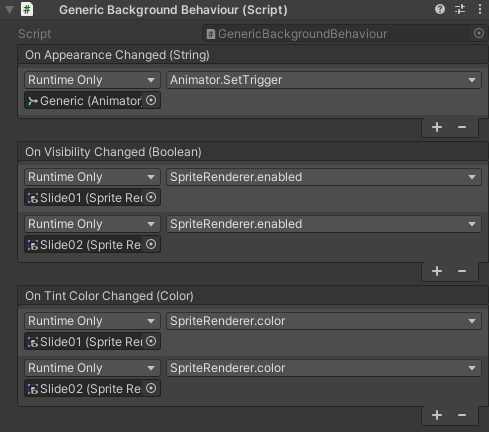 Generic actor implementations just route events from the scenario scripts and it's up to user to implement the underlying behaviour, eg how the actor should react to the appearance or visibility change commands, whether and how it will adapt to aspect ratio changes, etc. Don't expect most of the actor-related features to work automatically with the generic implementations.

Generic backgrounds are very similar to generic characters; check out a tutorial video on setting an animated 3D model as a generic character for one of the possible usage examples. Be aware, that the video is captured with an old Naninovel version and some properties and component names are different now; see the above docs for the up to date information.

Unity's Animator component could fail to register SetTrigger when the game object is enabled/disabled in the same frame; in case you use GameObject.SetActive to handle visibility changes (as it's shown in the above tutorial), consider enabling/disabling the child objects with renderers instead.

You can use a Unity scene as a background with scene backgrounds implementation.

Make sure to position the scene objects in world space so that they don't overlap with objects from other scenes, that could potentially be loaded at the same time (eg, when referenced in a single naninovel script). Additionally, be aware, that in case a scene background object is positioned near the global space origin (x0 y0 z0), it could be rendered by Naninovel's main camera; to prevent this, either offset all the scene objects from the global origin, or use Configuration -> Engine -> Override Objects Layer to isolate Naninovel-related objects using layers.

Resource name is expected to be equal to the assigned scene asset name; otherwise, Naninovel wouldn't be able to locate and load the scene at runtime.

You can now use @back command to control the created scene background actor, eg:

When composing backgrounds with Unity scenes, consider adding custom commands to control scene state (eg, modify light color to change time of day or move camera to change the view) instead of creating multiple scenes for each appearance. This way you won't have to track objects position to prevent overlap when multiple scenes are loaded.

It's possible to render character and background actors of all the implementations (except generic) to a texture asset, which can then can be assigned to a custom UI, printer, material or any other compatible source. Setting up background actor render to texture is very similar to that of a character; check the guide for more info and examples.