Characters are actors used to represent scene entities that are placed on top of the backgrounds. 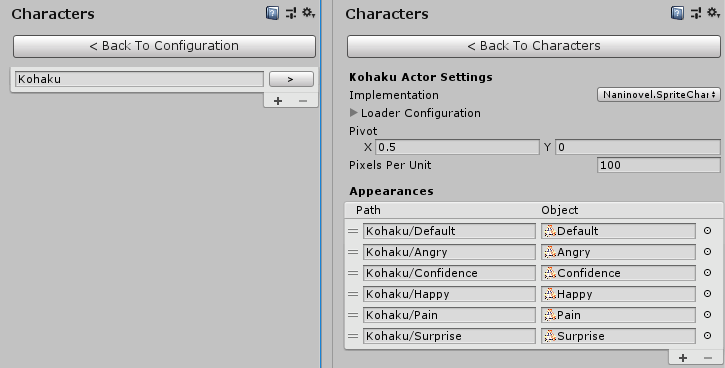 In naninovel scripts, characters are mostly controlled with @char command: Pose name can be used as appearance in @char command to apply all the parameters specified in the pose state at once, instead of specifying them individually via the command parameters.

Notice, that when a pose is used as appearance, you can still override individual parameters, eg:

In the character configuration you can set a Display Name for specific characters. When set, display name will be shown in the printer name label UI, instead of the character's ID. This allows using compound character names, that contains spaces and special characters (which is not allowed for IDs).

You can then change the variable value in the scripts and it will also change the display name:

It's also possible to use the name binding feature to allow player pick their display name using @input command:

When Use Character Color is enabled in the character configuration, printer text messages and name labels will be tinted in the specified colors when the corresponding character ID is specified in a @print command or generic text line.

The following video demonstrates how to use display names and character colors.

You can assign avatar textures to characters using avatar parameter of @char command. Avatars will be shown by the compatible text printers when they print a text message that is associated with the character. Currently, only Wide and Chat text printers support the avatars feature.

To use any given avatar, you have to first add it to the avatar resources and give it a name. You can do this via Avatar Resources property in the characters configuration menu. 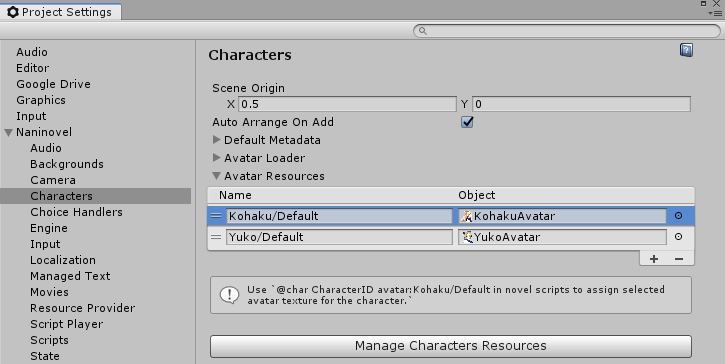 Notice: Avatar names can be arbitrary and don't have to contain an existing character ID or appearance. This is only required when you want to associate an avatar with a character so that it's shown automatically.

You can then show a specific avatar texture like this:

It's possible to show only the avatar of a character inside a text printer, but hide the character itself by setting visible parameter of the @char command to false, eg:

In case you're constantly changing avatars while the character itself should remain hidden, consider disabling Auto Show On Modify in the characters configuration menu; when disabled, you won't have to specify visible:false to change any parameters of the character while it's hidden.

When enabled in the character configuration, will tint the character based on whether the last printed message is associated with it.

Generic and Live2D character implementations support so called "lip synchronization" feature, allowing to drive character's mouth animation while its the author of the printed message by sending the appropriate events.

When auto voicing feature is enabled, lip sync events will be driven by the voice over; otherwise, printed text messages will activate the events. In the latter case, you'll probably sometimes want to manually start or stop the lip sync (eg, to prevent mouth animation when punctuation marks are printed); for such cases, use @lipSync command.

See Generic and Live2D character implementation docs below for the details on how to setup the lip sync feature.

It's possible to associate a text printer with a character using Linked Printer property.

When linked, the printer will automatically be used to handle messages authored by the character.

Be aware, that @print commands (that are also used under the hood when printing generic text lines) make associated printers default and hide other visible printers by default. When printers are linked to characters, print commands will automatically change the currently visible and default text printer, while printing text associated with the corresponding characters. It's possible to prevent this behavior by disabling Auto Default property in printer actor configuration menu; when disabled you'll have to manually show/hide and switch default printers with @printer commands.

Sprite implementation of the character actors is the most common and simple one; it uses a set of sprite assets to represent appearances of the character. The source of the sprites could be images (textures) of any formats supported by Unity. 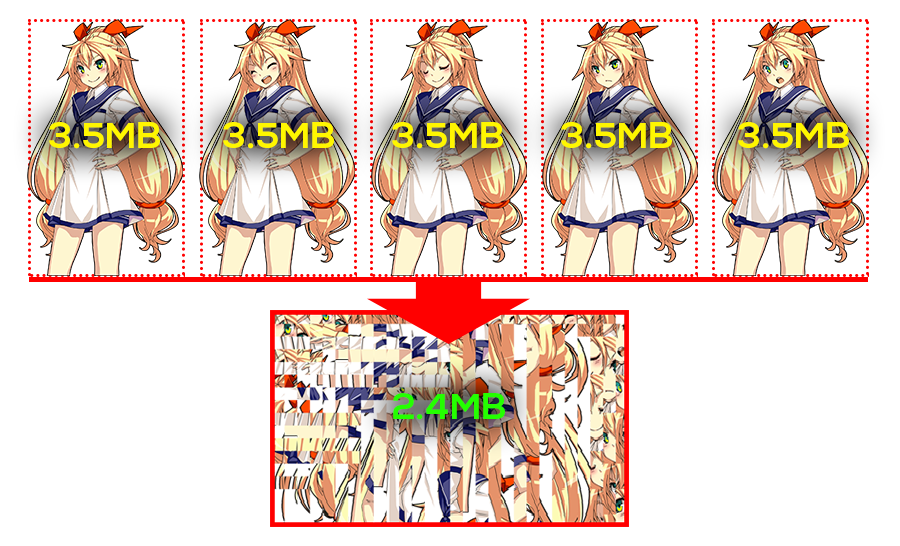 Be aware, that some of diced character metadata properties (eg, pixels per unit, pivot) are controlled by the atlas asset; while the values in the character configuration are applied to a render texture used to represent the actual sprite. When changing the atlas properties, don't forget to rebuild it for changes to take effect. 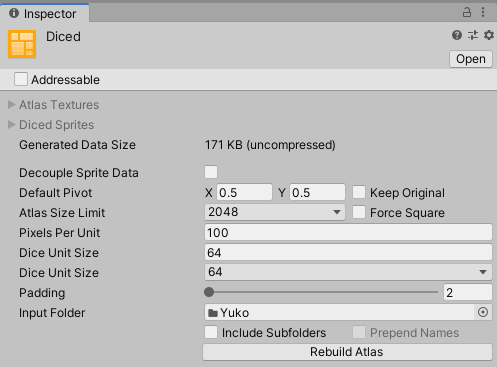 The following video guide covers creating and configuring diced sprite atlas, adding new diced character based on the created atlas and controlling the character from a naninovel script.

The layered implementation allows composing characters from multiple sprites (layers) and then toggle them individually or in groups via naninovel scripts at runtime.

To create a layered character prefab, use Create -> Naninovel -> Character -> Layered asset context menu. Enter prefab editing mode to compose the layers. Several layers and groups will be created by default. You can use them or delete and add your own.

Each child game object of the root prefab object with a sprite renderer component is considered a layer; other objects considered groups. Aside from organization and transformation purposes, placing layers inside groups will allow you to select a single layer or disable/enable all the layers inside a group with a single expression in naninovel script (more on that later).

To hide some of the layers from being visible by default, disable sprite renderer components (not the game objects).

The white frame drawn over the prefab is used to describe the actor canvas, which will be rendered to a render texture at runtime. Make sure to minimize the empty areas inside the frame by moving the layers and groups to prevent wasting texture memory and for anchoring to work correctly. 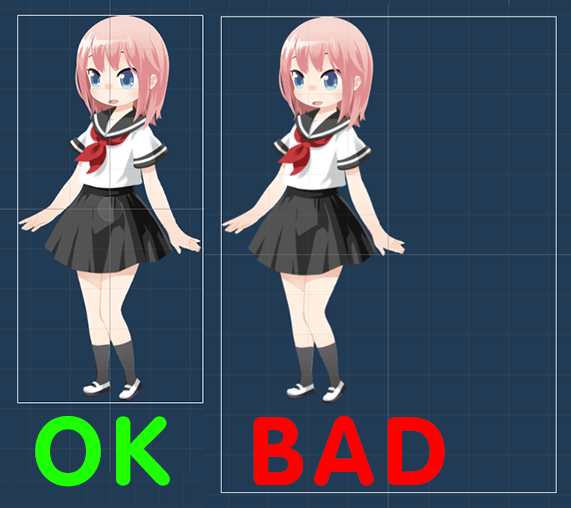 You can scale the root game object to fine-tune the default size of the actor.

Don't forget to add the created layered prefab to the character resources (Naninovel -> Resources -> Characters). Choose "Naninovel.LayeredCharacter" implementation and drop prefab to the "Resource" field when configuring the resource record.

To control the layered characters in naninovel scripts, use @char command in the same way as with the other character implementations. The only difference is how you set the appearance: instead of a single ID, use the layer composition expression. There are three expression types:

For example, consider a "Miho" character, which has a "Body" group with three layers: "Uniform", "SportSuit" and "Pajama". To enable "Uniform" layer and disable all the others, use the following command:

To enable or disable a layer without affecting any other layers in the group, use "+" and "-" respectively instead of ">". You can also specify multiple composition expressions splitting them with commas:

To select a layer outside of any groups (a child of the root prefab object), just skip the group part, eg:

It's also possible to affect all the layers inside a group (and additionally its neighbors when using select expression) by omitting layer name in composition expression:

The above expressions will affect not only the direct descendants of the target groups, but all the layers contained in the underlaying groups, recursively.

The video below demonstrates hot to setup a layered character and control it via naninovel commands.

Note: "@char Miho.Shoes>" command displayed in the video will actually select the "Shoes" group (disabling all the neighbor groups), not hide it. Correct command to hide a group is "@char Miho.Shoes-" 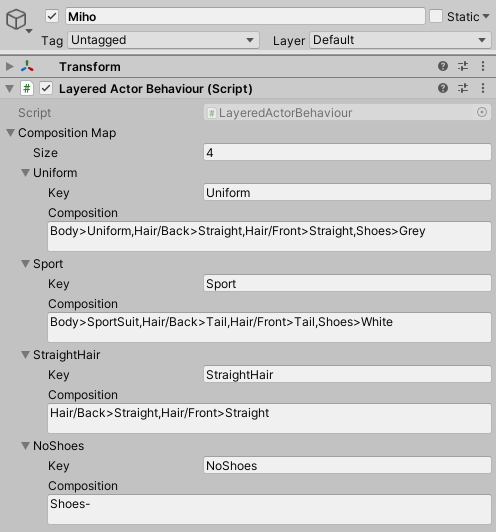 — the keys can then be used to specify layered actor appearance:

Be aware, that the layer objects are not directly rendered by Unity cameras at runtime; instead, they're rendered once upon each composition (appearance) change to a temporary render texture, which is then fed to a custom mesh visible to the Naninovel camera. This setup is required to prevent semi-transparency overdraw issues and to support transition animation effects.

Generic character is the most flexible character actor implementation. It's based on a prefab with a CharacterActorBehaviour component attached to the root object. Appearance changes and all the other character parameters are routed as Unity events allowing to implement the behavior of the underlying object in any way you wish. 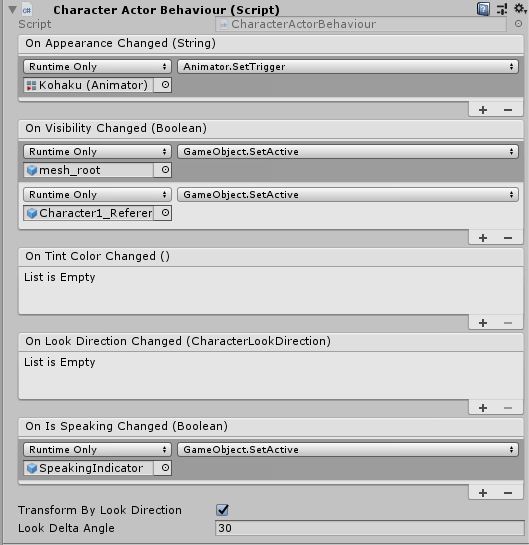 To setup lip sync feature for generic characters, use On Is Speaking Changed boolean Unity event of the CharacterActorBehaviour component. When the character becomes or ceases to be the author of any printed message, this event will be invoked allowing you to trigger any custom logic, like starting or stopping mouth animation of the controlled character.

Check the following video tutorial for example on setting up a 3D rigged model as a generic character and routing appearance changes to the rig animations via Animator component.

Be aware, that Unity's Animator component could fail to register SetTrigger when the game object is enabled/disabled in the same frame; in case you use GameObject.SetActive to handle visibility changes (as it's shown in the above tutorial), consider enabling/disabling the child objects with renderers instead.

In order to be able to use this implementation you have to first install Live2D Cubism SDK for Unity. Consult official Live2D docs for the installation and usage instructions.

Live2D model prefab used as the resource for the implementation should have a Live2DController component attached to the root object. Appearance changes are routed to the animator component as SetTrigger commands appearance being the trigger name. Eg, if you have a "Kaori" Live2D character prefab and want to invoke a trigger with name "Surprise", use the following command:

Note, that the above command will only attempt to invoke a SetTrigger with "Surprise" argument on the animator controller attached to the prefab; you have to compose underlying animator state machine yourself.

When Live2D's CubismLookController and CubismMouthController components are present and setup on the Live2D model prefab, Live2DController can optionally use them to control look direction and mouth animation (aka lip sync feature) of the character.

Consult Live2D documentation on eye tracking and lip sync for the setup details.

Be aware, that Live2DController expects a "Drawables" gameobject inside the Live2D model prefab (created automatically when importing Live2D models to Unity); the controller will scale this gameobject at runtime in correspondence with "scale" parameter of the @char commands. Hence, any local scale values set in the editor will be ignored. To set an initial scale for the Live2D prefabs, please use scale of the parent gameobject as shown in the video guide.

When Live2D extension is installed a "Live2D" item will appear in the Naninovel configuration menu providing following options:

The following video guide covers exporting a Live2D character from Cubism Editor, configuring the prefab, creating a simple animator state machine and controlling the character from a naninovel script.

Be aware, that the latest version of Cubism SDK for Unity is working directly with Animator component; expressions and poses (exported as expression.json and pose.json), that were previously used in Cubism 2.x are now deprecated and not supported by Naninovel's extension for Live2D.